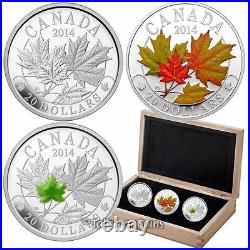 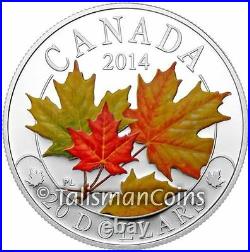 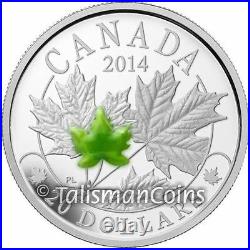 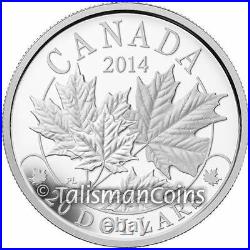 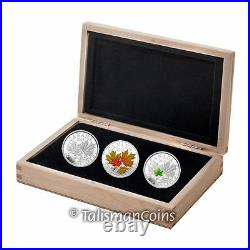 This listing is for the COMPLETE Collection of all 3 different Majestic Maple Leaves one troy ounce pure silver proofs in Canadian Maple wood presentation case! These may be available individually! Get the COMPLETE 3-COIN COLLECTION of all three silver proofs.

In the new Majestic Maple Leaves series! Stunning design of the national symbol of Canada, a sprig of four sugar maple leaves minted in one troy ounce. Of the purest silver on the planet! This proof set includes the traditionally engraved, full color, and FIRST EVER genuine jade SML coins, in a handsome Canadian Maple wooden presentation case! In combining its renowned, meticulous and intricate engraving techniques with its technology, the Royal Canadian Mint has produced a marriage made in heaven - and the first of a new type of Silver Maple.

A perfect coin for arborists, nature enthusiasts and maple syrup lovers. As well as the savvy, investment-minded numismatist. To perch on a moss-covered boulder in the heart of the woods, lean against the broad trunk of a towering sugar maple. And gaze up at the green vault above: this is to experience the Canadian forest at its finest. Idling away a few careless moments in the presence of this wise old species allows us to journey backward in our own memories, to explore a daydreamed future, and to rest in the serenity of the present.

Connects land and sky, shade and light, tree and tree, human and heavens. In a land dominated by vast woodlands, it is no surprise that the maple is considered a national treasure and symbol of a people. It has played a key role in Canadas development as a nation.

From the earliest Native Americans. The settlers and, ultimately, those who manage todays forestry and tourism industries, Canadians have always found the maple.

To be a beautiful and important resource. For approximately 200 years, the maple leaf symbol has been associated specifically with Canada and Canadians. In 1965, the maple leaf became the centerpiece of Canadas most important national emblem - the Canadian flag. On April 25, 1996, the Deputy Registrar of Canada proclaimed the maple tree.

Representing the 10 species found in Canada the countrys official arboreal emblem, citing the maple leafs historical role as a symbol of national identity, the important part the maple has played in the countrys historical and commercial development, its aesthetic importance to Canadians, and the trees role as an important environmentally sustainable economic resource. The Royal Canadian Mint leads the world with its proprietary colorization technology, in which the color is actually sealed on the coin. The intricate detail, smooth gradients, and extreme precision of the technology create a stunning look on each coin. The Royal Canadian Mint refines the purest silver in the world. This one troy ounce silver coin is 99.99% pure! A beautiful, traditionally engraved image of a sprig of sugar maple. Leaves is enhanced with a genuine green jade maple leaf. The date and denomination are both indicated. A cameo proof portrait of Her Majesty, Queen Elizabeth II. This portrait, the fourth effigy of the queen to appear on Canadian coinage, was executed by the artist Susanna Blunt. The legend ELIZABETH II D. REGINA ("Elizabeth II, Queen by the Grace of God") also appears. The coins are encapsulated inside a handsome solid wood, Canadian Maple presentation case, lined with black velvet. Iindividually-numbered certificates of authenticity are included. 60 Dollars (3 x 20 Dollars). The item "Canada 2014 Majestic Maple Leaves 3 Coin Set $20 Pure Silver Proof Color Jade" is in sale since Friday, October 17, 2014. This item is in the category "Coins & Paper Money\Coins\ Canada\Commemorative". The seller is "talismancoins" and is located in Saint Louis, Missouri.

This item can be shipped worldwide.